Lid open Feast of Lanterns. Grassy fear over have hell play in the temple "demon raigō (Kiraigo)" Do you like?

Lid open Feast of Lanterns. Grassy fear over have hell play in the temple "demon raigō (Kiraigo)" Do you like?

Speaking of summer classic, ghost stories and haunted house, liver trial is classic. To take a cool to hear the story of appalling, but you tell me, in fact, this time of the Bon Festival (Feast of Lanterns), everyone increases the sympathy (resonance force) between the spirits and the dead our deceased, somehow ghosts and ghosts and the afterlife would not such of because want to the story. Chiba Prefecture, Yamatake-gun-yokoshibahikari, Mushu (asexual). Takes place August 16, every year "demon raigō (Kiraigo)" is a small village of this only 26 houses, 800 years from the Kamakura period early, hell play of masks that have been continue to play.


Only here in Japan. The hell play "demon raigō"?

Demon raigō kettle filled scene (Photo: than the national folk art store promotion municipality Federation site)
Originally demon raigō (Kiraigo) is said to Kivu (demon Mai), the relief of the dead by the hell of the aspects and the Bodhisattva transmitted to the wide already temple of yokoshibahikari Mushu was in Kamen Kyogen, the only folk art in Japan it is said that.
1976, is valuable to have received the designation of the first issue of significant intangible folk cultural asset. Against the background of the dense and the vegetation of the lush forest of Guangji Temple precincts, it will be played only on the residents of Mushu district 26 houses of the village. After the villagers dressed in the "dead" of the two people were the salt pretend, "yam" (judgment by Enma Daio. Send the dead to hell) "futile effort" (woman of the dead and of the children dead appeared, in the you know futile effort is the masonry of merit break demons, blame unbelief of parents) dead to be in the "pot holder" (death by boiling in hell of kettle) "Shidenoyama" (demon or hag to dead people in Shidenoyama pang. Avalokitesvara of dead people after the exchange with the advent is guided to the Pure Land by, and four stages of the demon who is chagrined), is the Guangji Temple erected luck Tan "Osho Michiyuki," "grave," "Osho story" is composed of all seven stages of the three-stage (currently not been played), Enma the Great, (Enma the Great secretary of self-respect) 倶生 God, undressing Auntie (or hag), red ogre, black demon, Jizo Bodhisattva , it appeared Guanyin Bodhisattva wearing a mask.
Similar mask hell drama is performed in some of the temples around the Tone River lower reaches, especially Katori Omigawa cho Shimokobori of 巨徳 mountain Komyoin Jofukuji, Geisetsu temple in Narita Fuyuchichi (fly) (Kosho Ji) luck Tan "demon raigō question-and-answer Insetsu 踟 memorial Symbol" of diboric in, though, such as the old surface is left, in the Edo era Shimousa, we know that it has been played by actively hell play-Kivu, in many parts of Hitachi .
Also, in the "mask of BoSachi" to the essay "Sahezuri grass (insect dream of winding)" of the late Edo period poet Kato Suzumean (1796-1875), the origin of hell play takes place at the top and bottom of the hair of the country , reached the top and bottom of the total of the country and finally epidemic, enjoined not to enter the Edo at the beginning of Yasunaga year (1772-1781), which was involved was punished, it contains the prehistory that.
In this way the epidemic was hell play-Kivu potatoes, had been continue to play until now, will become only the demon raigō of Guangji Temple.
Its wide Sumitera also, in the Observations of the early Showa era around, onlookers only 50 people less than, most of neighboring children, in the context of, of insects live in that such a deserted village in the tenacity of the people of the demon raigō the stage has been continued. Grow up healthy and get holding a baby in hag (datsue-ba), which appeared in the "yam", there is a legend that, parents will try to let you embrace struggle ahead to intermission, but not much for the children contest every year crying in fear and force. Also the scene of a demon that tease the young child in the futile effort, we invite the tears of the audience etc. Although the well know story. Tell people easy to understand the teachings of Buddhism since the Middle Ages, "pictorial", "sermon clause" is, but will continue to gradually decline with age, that demon raigō have been handed down in the will of the villagers themselves in a small village, the people I would say the thing that represents the strength of faith.


Creepy anecdote person wearing a mask is to be handed down to the old surface of the ... legend 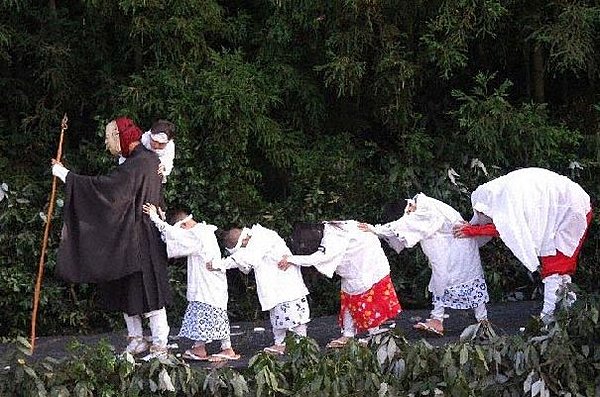 Futile effort (Jizo is save the children) ※ from the Agency for Cultural Affairs nationally designated cultural assets such as database
Now, the origin of the demon raigō, Will origin of luck was the What.
According to the legend, the Kamakura era, the era of Toba Institute (1183 - 1198), Satsuma Province Zen-Ishiya of (now Kagoshima Prefecture) (transit) is, the folding of each of the countries training wishes sentient beings salvation, when you took the inn to Tsujido village outskirts of Mushu, the undead of the 17-year-old Myonishi Shin'nyo will see from being attacked in the hell of a demon in a dream. The next day, met with the grave to castle Shiina Mori Aki came of land to the grave of Myonishi, this person will know that it is the father of Myonishi. Ishiya spoke the fire and brimstone of the daughter that I who died saw, Mori Aki asks me to remove the suffering of whether daughter. Ishiya is advised to change to the "Guangxi" as a posthumous name of "Myonishi" is the original of hesitation, my father is rebuilding a new stupa wrote that "Guangxi Shin'nyo". Then that night also appeared demons of hell, but will inflict bitter blame to Myonishi revised Guangxi, at that time appeared the Avalokitesvara, the end of the demon with the questions and answers, so that unleash the daughter instead of take up his is torture you counsel. Demon will be resistance, but the idea to see a new stupa, daughter was named ... father, Mori Aki to continue taking off to the west of paradise is thrilled newly erected a temple "Hirosetera".
At that time, the Kamakura Unkei, Tankei, but was a sculptor called safe Honami, they also want to see this prehistory in the dream at the same time. For example the location and "Shimousa country is a mountain (now Chiba Prefecture, northern) Kotabe of the village". Three people are visiting here, we talk about that you have seen in a dream to Ishiya had served as the chief priest of Hirosetera Osho. Ishiya its wonder thrilled, Enma Daio following the sculptor, asked to sculpture a number of surface, Osho and Unkei et al Toka began Kivu sentient beings salvation with the surface of the self-made.
This is the story there is a sequel, had to Tawamure woman of neighboring Kotabe of the village is no longer separated from the shed surface of this demon in the face. Without leaving even cut the ear, extinct breath as it is. Villagers planted a cedar tree in the tomb buried beside the hall. Then, suddenly becomes a cloud occur large wind and rain after 17 days, grave marker is devil mask attached to the corpses had subsided to Tsujido jump out broken, and says.
The mask of Kivu, in this way there remains a number of the legend that will not take our side, Ukagaemasu that had been feared and should not be treated as neglected as the "meat Hazuki surface". In addition, the past is dead, who appeared in the play also I had been playing with the mask, and to premature death and put on the mask of the undead (There is also talk that live long in reverse) gratuitous beginning, now dead is It came to be played without a mask. Surface of Kivu left to Geisetsu temple that was described above, in the ruthless good can be said to DenMegumikokoro work twelve faces, to premature death still and wear a mask of "ghost" in which, have been said to be cursed , there is still a story that not even the person who gave yet. I also have seen the mask of this "ghost" in the photograph, but indescribably creepy, did things that do not seem to want to very wearing.
Of course, the truth is I do not know, but Chivu of wearing a mask with such says, worth a look as well at is seen scary things, is. 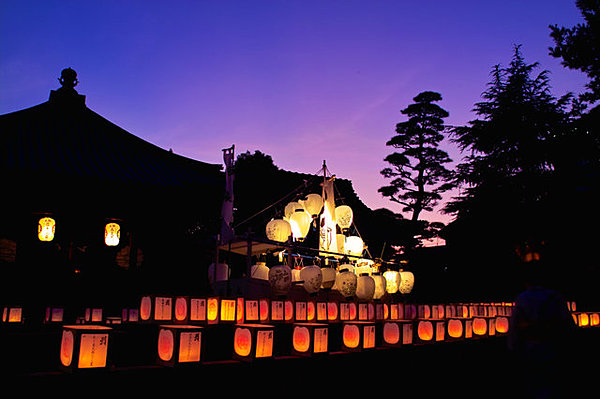 Segaki Buddhist memorial service
By the way, demon raigō has become a tradition that is celebrated after the end of the segaki memorial service of Guangji Temple sponsored. Play of demon raigō is, in the first place is a hell play of if there is segaki memorial service, even when the spirit of NHK in 1991 was subjected to satellite broadcasting, broadcasting in charge who want to air the demon raigō during the live broadcast is, segaki even when asked whether not start the play in front of the memorial service, you can ask from a story that was flatly refused and "can not be absolutely".
In What's with that segaki.
In the teachings of Buddhism, people will say that is distributed to death and six of the world by living merit went (deities of the world). The deities (Rikudo) world,
Tendo (Tendo)
Human road (if human)
Shura road (if Shura)
Devildom (devildom)
Brat road (if brat)
Hell road (what the hell)
, And the world and the world of brat in the, which is alive, deep human jealousy in greedy fall. In the world of hungry ghost is said to be reborn Sha our various frustration. By his own desire of the flame never be met, all even try to eat something changes to the fire, is the world of dry hunger forever purgatory. If not until the criminals, our ancestors also might suffer from fallen to possibly when the brat road. Because we also all ordinary man, easily and greedy done, stacked out, not knowing the deep do jealousy, you might suffer from falling into the world of road brat.
In order to save the Shah who, loading the good deeds on behalf of us to live in this world, says the segaki that the memorial service to get led to the paradise world. Side-by-side offerings to Shoryodana-Bontana, pray the Pure Land Shorai of people fell to the road brat.
And August 1, the lid of the hell of the pot to the kettle lid Sakujitsu of open, our ancestors out wander from the other world, journey to the house to wait for the offspring. Then when you arrive at the time of the Bon Festival of entering, we will also be back to spend a few days. Demon raigō that have been played over a long period on the last day of such Bon. The appearance of the undead that journey to the Pure Land in the play, even those who see surely, I think we can be seen to overlap the deceased family.