Summer is more fun! Basic knowledge of "Bon Odori" I want to hold down

Summer is more fun! Basic knowledge of "Bon Odori" I want to hold down 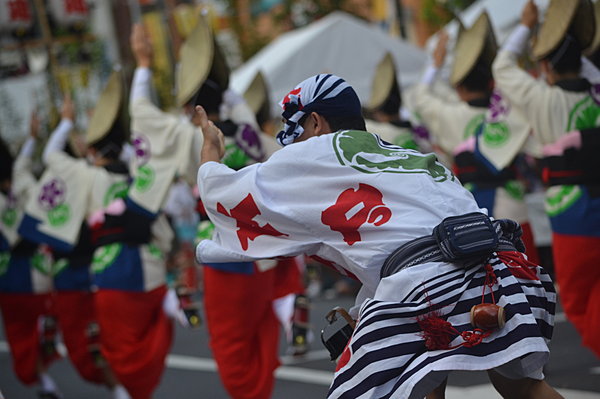 Summer tradition, Bon Odori, was dancing for comfort the spirits came back originally to this world
Every year, temples and shrines of the precincts when it comes to the time of the Bon Festival, the venue of the square, such as dry riverbed, Bon dancing competition will be opened in various locations.
There are young and old, which was decked out with a clean yukata, under the light of lanterns, scenery walking dancing around the tower in Ondo is a summer tradition.
The original Bon Dance, is said to dance to comfort the spirits of the ancestors came back to this world in the tray. Also joined cultural and historical elements of each of the region, I was born a variety of Bon Odori. Where famous, it is one of the Bon Odori well as Awa dance and Okinawa Acer of Tokushima.

The role of the Bon Odori
One of the most important role of the Bon Odori There may be referred to as "comfort the spirits."
Old ancestor faith and transmitted from in Japan, such as the Buddhist way of thinking is to syncretism, the time of Obon spirits of ancestors were thought to come back to this world from the other world.
The Bon Odori, comfort celebrates the spirits of the ancestors came back from beyond the grave, and there was a goal again send to the other world.
Along with such as backfire and ceremonial bonfire, it is Bon dance as a important event of Obon.
To these ideas, by Buddha and dance called "Namuamidabutsu", and Buddha dancing for memorial service to the dead, the Edo era, dance Komachi of girls dressed in Tanabata danced in Kyoto, spread with the epidemic of your Ise Shrine such as the Ise dance, joined the elements of wind flow dance, believed to have born Bon Odori, such as now.
Niigata Prefecture Sado of Shiogama shrine (Shiogamajinja) is, ema of the Edo era of Bon Dance of the landscape has been drawn, "Aikawa Ondo Ema (Aikawa Ondoema)" has been left behind. A plate of about 1 meter square of the square, or the mask, you have state of the people who are dancing the Bon dancing and a variety of fancy dress is drawn. Dancers suffered the mask is said to represent the dead, living people are dancing happily along with the spirits of ancestors, it seems the feeling of trying to get back to the other world happy has appeared .
Bon dancing to expel the spirits to bring a calamity 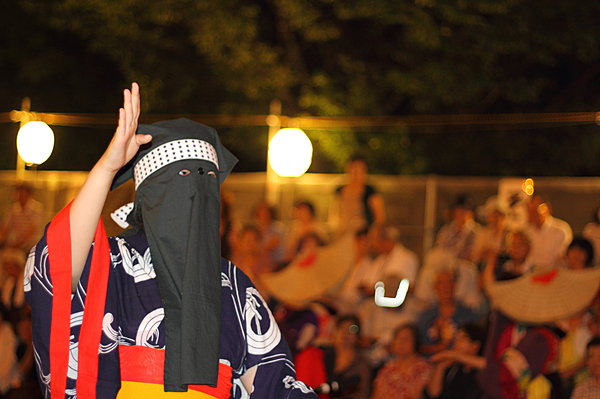 Bon Odori dance to imitate the appearance of the dead remain in the country (Photo Nishimonai Bon dance)
Spirits of ancestors should be sent to the afterlife with a warm welcome, but also troubled spirits bring disaster and misfortune to the people who are sometimes alive, was thought to come from the other world.
Such a spirit, you need to drive out in a hurry from the living area.
Bon dance of areas with Nagano Prefecture, old while dancing to create a matrix, had been around the houses.
(Died arabonic-Hatsubon. People for the first time of Obon) that year in arabonic around the house to welcome, will go from dancing Buddha dance, until the border of the village to the top of the Bon lantern.
Then burn the Bon lantern, shoot the gun. In the village next door heard the sound of the gun, immediately dancing started, go to Murasakai in the same way.
As of the relay, placed on a Bon dancing as soon as you receive a misfortune, thing that Let's drive out to the next village.
The new role of the Bon Odori 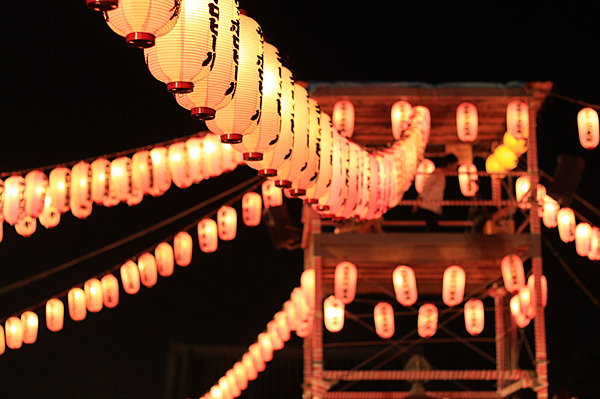 Bon dance that was to be carried out in various locations from the Edo era
In addition, the Bon dance is also terms of harvest prayer.
Obon is not only the Buddhist thought, so there is an element of ancestor worship ancient in Japan, the gods also in Bon Odori ancestors deified, also means hope the good harvest of the year before the autumn harvest there was seems.
Since the festival of each harvest prayer ancient in the region has become one of the elements of the Bon Odori, the birth of a lot of unique Bon Odori, might have evolved.
Bon Odori is, in the Edo era came to be carried out in various places. Gradually along with it, now also added element of entertainment. Become a centerpiece of tourism further in recent years, Japan, as well, there is also a Bon Odori visited by many tourists from all over the world.
Bon dance around the country

One of Japan's three largest Bon Odori, Tokushima Prefecture Awa dance
Bon dance is done in Japan.
It intended famous, called Japan's three large bon dance, Akita Prefecture Nishimonai Bon Dance (Nishimonai Bon dance), Gujo Odori (Gujo dance) of Gifu Prefecture, and there is such as Awa Odori of Tokushima Prefecture (Awaodori). In addition, it is a kind of also Bon Odori Okinawa Acer.
Also different, such as dances and Ondo by each region. Here, we introduce a variety of Bon Odori transmitted to the various places.
Nishimonai Bon Odori:
In Akita Prefecture, Ugo-machi, Bon dances to be performed up to 18 days from 16 August every year. It has been designated as an important intangible folk cultural heritage of the country.
Its origin is not clear, theory and that started when danced to pray for good harvest in the Kamakura period, when the lords who had ruled the region were destroyed in bamboo, the former lord the surviving retainer us It was dancing undead dance There is such a theory that began in order to memorial service.
Dancers, issue the only eye wearing a cloth, such as the black bag that the braided hat and Hikozo hood. It is said to represent the appearance of the spirits came back to this world.
Gujo dance:
Through early September from mid-July in Gifu Prefecture Gujo Hachiman-cho (Hachiman Gujo), is the Bon dance last more than 30 nights.
Venue Square and, in the streets, the shrine of the precincts, the hotel car park, such as, change one by one place to overnight, and one full year the town over summer. Four days of 16 days from August 13, is carried out all night dancing to dance through the night, the festival also will mark the climax.
Edo era, the danced and had Bon dancing gathered in the castle in the village people of the lord of the then territory has been said that the opening that was encouraging as "not apart of identity, good to dance with unrestricted binge". At that time, and so on hierarchy of samurai, identification of people had been established firmly by the system. By Bon dancing, has been that efforts to those of harmony.
Awa dance:
Is Bon dance that has been done in Tokushima Prefecture around the municipality. Above all, take place four days from August 12, every year up to 15 days, the city of Awa Odori Tokushima, is the largest in the country.
Its origin, but there are several theories, when the clan its Awa was holding a residence in Tokushima, townspeople who were served wine in the castle celebrate is, begins the joy of so much festive dancing, there is a theory that.
Made dozens of people and the population, respectively, in their own way of outfits and walk dance while Hayashi shamisen, drums, drum, flute, bamboo flute, and the like. The dance is said to have conveyed the old forms of the Buddha dance.
Acer:
Is a dance that is danced to the time of the Bon Festival in Okinawa Prefecture. In order to pick-up the spirits of the ancestors came back to the Bon Festival, young people in a body, parade while dancing according to the musical accompaniment and song, and around the door to door.
It was done on the night of the feed of Thanksgiving, but as is often carried out in a few consecutive nights from the date of the pick of the basin in recent years.
In addition to this, we have conveyed a variety of Bon Odori in Japan.
Since it has also been introduced in more detail in such as home page, such as Rural Tourism Association, please refer to. At the same time, as a forum for exchanges of people in the community, I would like to cherish even local Bon Odori.